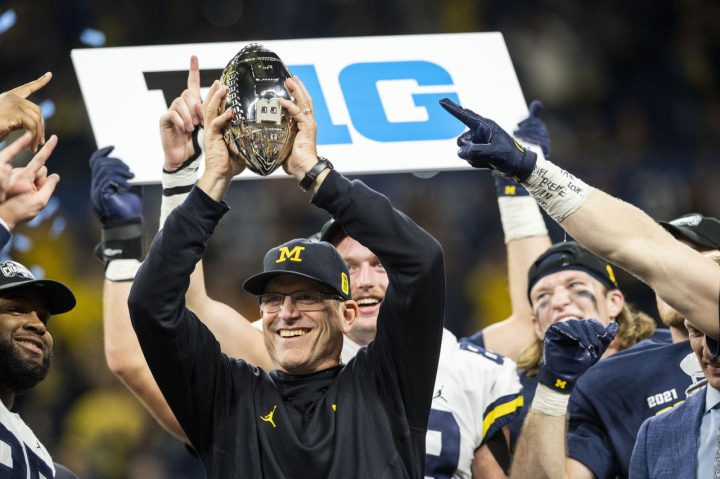 College football has always been more about the coaches than the players. Those players are in and out of there in 3, 4 or 5 years. Coaches were the figure heads of programs for years Osborne, Switzer, Schembechler, Hayes, Bowden, Frye, Stoops.

At some point winning your conference or going to a bowl was no longer enough. You had to be in and win the championship game or you weren’t squat.  With that came relentless pressure to win it all but only one team can raise that trophy each year. If it wasn’t you then the fans and the media designated you for the hot seat.  Suddenly every program adopted this standard of “we compete for championships every year.”  You better keep repeating the company line at every press conference or here’s your blindfold and your cigarette.

Suddenly every program adopted this standard of “we compete for championships every year.”

No one wants to get fired and since this is the career a man has chosen he has to play the game. That’s when the lies get told.  Coach can’t tell the recruit the truth because a) he doesn’t want to hear it and b) he won’t sign with his school.  Coach can’t tell the media the truth because they’ll make sure they don’t have a job around the same time Saint Nick starts shimmying down your fireplace.

Armed with these facts, college coaches must skirt the truth and always have an exit plan. Few of them feel safe. So the moment they reach success they MUST consider their options.  You heard me right. Winning brings anxiety and starts the college coach on his way to getting fired.  That’s it,  that’s the prize.

Coach can’t tell the recruit the truth because a) he doesn’t want to hear it and b) he won’t sign with his school.

Signed a top 10 class? It better not be #22 next year. Played for the conference championship last year? You better not lose four games this year.  Had a Heisman candidate at QB this season? The blue chipper you just signed better be the deal or you know what time it is.

Everyone’s on the coach’s head for lying and leaving but he’s not necessarily chasing a pay check. He’s chasing security. He’d love for his son and daughter to graduate from the same high school but you see that’s not how this thing works.  I’ve watched the masses blame everything we have going on in college football on the coaches. They’re blaming it on the guy that works 20 hour days, has estranged relationships with his family while devoting his life to someone else’s kids. They’re blaming the guy answering texts for an entire Christmas Day because God forbid if you don’t tell that 5-star Merry Christmas and your rival does.  Activate the the notes app on the iphone and draft that tweet….. “please respect my decision.”

Everyone’s on the coach’s head for lying and leaving but he’s not necessarily chasing a pay check. He’s chasing security.

Ten years for $9.5 million means no one is going to feel sorry for that guy.  All those who don’t have that kind of household revenue think they’d do anything to get it so coach should just shut up and take his medicine.  You haven’t walked in those shoes.  I think if you asked the coaches,  a majority of them would tell you that they would take half of what they make to just have a semi normal life and some job security.  They’d like to be able to park their car in the same driveway long enough to stain the brick pavers.  Hell,  they don’t have time to spend the money anyway.

I think if you asked the coaches,  a majority of them would tell you that they would take half of what they make to just have a semi normal life and some job security.

You finger pointers in the fanbase, in the media , on the board of trustees and at the recruiting table,  check yourselves. Guess who needs to absorb a major part of the blame? Yea that’s right,  it’s you.  At this point,  college coaches are nothing more than frogs on lily pads simply looking for a safe place to land.