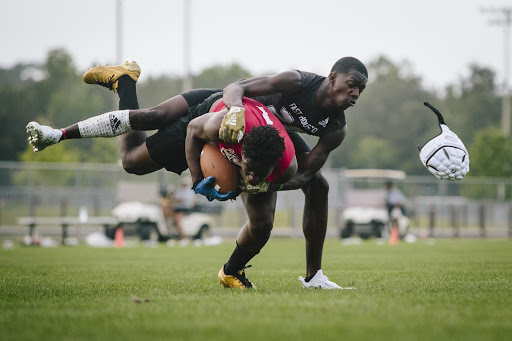 It’s the annual struggle.  Kids leave the “real” high school football season in December and immediately turn their attention to the all important 7on7 season.  Some do this against the best wishes of their high school football coach.  Others are forbidden from participating in it because their coach is 100% not in favor of it.  Your high school coach hates All Star 7on7 and here’s why.

There are a ton of fast food restaurants out there that started off serving just one item.  There are even more that just served dinner or just breakfast.  Many of them now serve multiple items streaming across a wide pallet of tastes and are open 24 hours delivering breakfast, lunch, dinner and all the snacks in between.  Why do you think that happened?  It happened because they just couldn’t stand to see you go to another place to have your needs fulfilled.  Those restaurants wanted total control of your dining experience every time you wanted to eat.

Most of your high school football coaches,  want total control of your football experience.  They want control of your in season play as well as your offseason activities.  If it’s about football,  they want to be the say so in it.  The athlete going elsewhere to learn or engage in football type activities is frightening.  Your coach has no idea what you will learn in the offseason from someone else that they might have to undo once you come back to them full time,  if you come back to them.

Notice how your coach may not have that much of a problem with you running track,  wrestling,  playing basketball or hitting the baseball diamond.  Those things aren’t football, football is their thing.  It’s fine if you want to do another sport,  they may even encourage it but when it comes to All Star 7on7,  that’s football,  that’s supposed to be their thing.

For some coaches,  it’s just as simple as,  they have their way of doing things,  they believe in it and they don’t need you picking up any bad habits.  Many coaches have a disdain for the unreal aspects of 7on7.   Some of those things are too much time to throw the football,  unreal releases off of the line of scrimmage by wide receivers and the amount of holding you may get away with as a defender.  Your high school coach doesn’t want to have to deprogram you once you are done with your all star 7on7 season.  Your high school coach is probably also on social media and only really gets to see the viral clips of all star 7on7.  This often involves disrespectful celebrations, blatant penalties, fights and unprofessional behavior by 7on7 coaches.  It would be really easy based on these mini-clips to come to the conclusion that this is all that all start 7on7 is about.  Social media has a way of distorting reality.

Another segment of coaches run a highly organized offseason program.  For some,  it’s tradition.  From the weightlifting, to speed training and conditioning to leadership classes,  participating 100% in the program gives you a leg up on the guys you are competing against for a starting job.  It also gives the better players on the team to display their leadership.  All star 7on7 is not part of those programs. Often times those programs feel that it requires 12 months out of the year to get and keep you in the right frame of mind to be a champion.

Then there is that other segment.  There is that segment of coaches that are scared to death that you will go play all star 7on7 and then transfer out of their program.  These coaches think that you will be unduly influenced by all star coaches who often coach at other high schools to switch to their program.  These high school coaches are worried that another coach will build a strong relationship with you,  teach you things,  seize your mind and send you into the guidance counselor to ask for your transcripts.  To these coaches,  letting you play all star 7on7 is like letting your girlfriend go out on dates during the spring and then ask her to be your full time lady in the Fall.  Your high school coach does not trust all star coaches more than they can throw them.  Sometimes it’s because your high school coach either knows he’s not providing you with what you need and has a complex.  Other times it’s because your coach has had a few bad past experiences with theft as it pertains to all star 7on7 coaches.

I am not here to say your coach is right or wrong.  It would be wrong of me to do that.  However,  I am giving you this information so that you can understand where your coach may be coming from.  The best way to combat this situation is to have an open line of communication with your coach.  In the back of his mind,  one or more of these factors exist in his head whether he is allowing you to participate in all star 7on7 or not.  Take the first step in being a man and communicate with your coach with regards to the all star 7on7.  Assure him that you realize every part of 7on7 is not real and that you are being mindful of your technique and habits while you are out there.  Let your coach know that one of the coaches may be trying to induce you to switch to their school.  Assure your coach that you are listening to that.  What coaches really hate is when a player and their parents do things secretly.  Be as open as you can.

For coaches that may be reading this,  realize that all star 7on7 provides a few crucial things to your athlete.  First,  is that it creates exposure opportunities.  We can debate all day about whether or not a kid can actually get offers directly from 7on7.  Let’s not waste our time on that.  One thing that is not debatable is that your athlete gets more exposure by performing well at 7on7 events.  These events are widely covered by recruiting media who will provide video, write ups and shine for your athlete.  Your athlete shining brings a spotlight to your program.

The other thing it provides for your athlete is a certain amount of freedom.  A football season can be stressful.  There are also a ton of rules both on the team and on game day in real football.  7on7 gives the player a chance to let his hair down and have some fun.  For us older coaches it’s similar to when we were allowed to just go to the park and play ball as youngsters without coaches around.  Remember how liberating that was?  Often times a player can do a little experimenting and learn something new.  That new thing might be a breakthrough for his development.

Finally,  your player is in highly competitive situations in all star 7on7.  The mental training that this provides in immeasurable.  There is a certain mental toughness that is developed by constantly being put in these situations.  It’s the kind of mental training that can’t necessarily be duplicated by you setting up a tug of war in your offseason program.  I have personally watched athletes grow up during an all star 7on7 season.  The chance to also be around other players from other schools allows them to build relationships,  learn about some other positive things that they may bring back to your program.  It’s not all negative.

Ultimately,  the decision is up to your high school football coach with regards to participation in 7on7.  I personally believe that if you are going to allow your players to participate then you should probably go easy on criticizing it.  Just my two cents.  I hope this article has been helpful for both the player and the coach in understanding where both are coming from on the matter of high school all star 7on7.  I know the debate will continue to rage on.