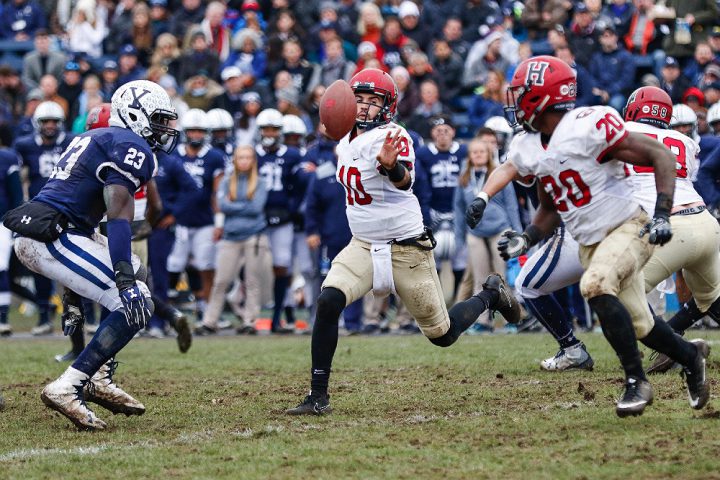 In the next part of my recruiting law series,  I move onto one that is the essence of the recruiting process and that is decision making.  Everything in recruiting is about decisions.  When to workout,  what high school to go to,  what camps to go to,  etc.  Every level of the process and every aspect of the process involves making decisions so it only stands to reason that being good at making decisions should be a key emphasis as you go through this process.

This article is as much for parents as it is for prospects.  The reason I say this is that the earlier a prospect can develop decision making skills the better.  As much as I may think I am good at writing,  I know a kid playing youth football is not likely to read this article.  So to the parent or mentor that is reading this,  make making decisions a key part of a child’s development.  Don’t make all the decisions for them.  Give them options and observe their choices.  Review with them the results and give praise when a good decision was made with positive results.  Likewise,  point out the negative results when a poor decision is made.  However,  do not forget to point out when a poor decision was made and through fortune (aka luck) a good result was achieved.  This is very important!  Explain to your young titan how he “got away with one” and how he may not be so fortunate next time.  Believe me,  the opportunity will come where you can show him how he attempted to make the same type of decision and it didn’t work out for him.  Bottom line though,  like anything else you want your kid to be good at,  making decisions needs practice.

Whether athlete or parent of athlete,  you need to realize that the game is nothing but a series of decisions.  Take the marquee position of quarterback.  During the course of the game they are making a plethora of decisions like making audibles, choosing who to throw to,  when to call a time out,  when to take a sack,  when to run with the ball, etc.  Their ability to make wise decisions from moment to moment has as much to do with the outcome of the game as does anything else happening on the field.  I personally find decision making to be the #1 element in evaluating the worth of a quarterback.  As a player,  take time after a game to review the decisions that you made.  Evaluate how you did with your decisions and how you can improve.  Match the decision making in one game vs. that of another.  Every position involves a decision on every snap.  How good are you at making them?  The game is what the prospect loves.  Using it to show how decisions cause you to win and lose is a fun way to learn the effects of decisions on outcomes.

Decisions are not just for practice and games in the Fall.  Who you are during the season is a direct result of who you were during the Spring and Summer.  Take a hard account of the decisions you make during that time of year and evaluate the results.  Party vs. studying.  Film watching vs. video games.  Facetime with the girlfriend vs. learning your plays.  Hanging with people with no future vs. people who are grinding for the same goals you have set for yourself.  What you achieve in the offseason will be a direct result of which one of those options you choose and many other scenarios just like it.  Of course,  you want to have fun but you also want to stay on track.  Take constant stock of the decisions you are making in the offseason and the results they are producing.

Self awareness and good decisions are brothers

I’ve never met a good decision maker who did not have a good sense of who they are.  Take time to really evaluate your strengths and your weaknesses.  Take time to honestly evaluate where you stack up vs. the competition when it comes to recruiting.  I have to admit that this is a very difficult part in the process.  This is why I say that the earlier you start at becoming a decision maker the better.  If you are good at decision making by the time you become a prospect,  the easier this hard part gets.  Choosing the right camps to go to will involve you knowing who you are.  Skipping a camp where you are most likely to get an offer to instead go to a camp where you have no shot can be detrimental.  Transferring from one high school to another because you thought you were better than you were could really tank your chances at getting a scholarship.  Choosing to play for a college that is not suited for the way you play the game because you don’t know who you are could result in your college football experience being a bad one.  Making good decisions in the recruiting process first requires you knowing who you are.

Strong decision makers tend to be a lot more happy in life than those who are not.  This is definitely true when it comes to the game of recruiting.  The transfer portal is packed tight with guys that made some poor decisions in the recruiting process.  Not every decision to transfer is as a result of a bad move by the player but it is my experience that most of them are.  Recruiting,  like life,  is all about decisions.  Become a 5 star decision maker and you’ll score a touchdown in recruiting.