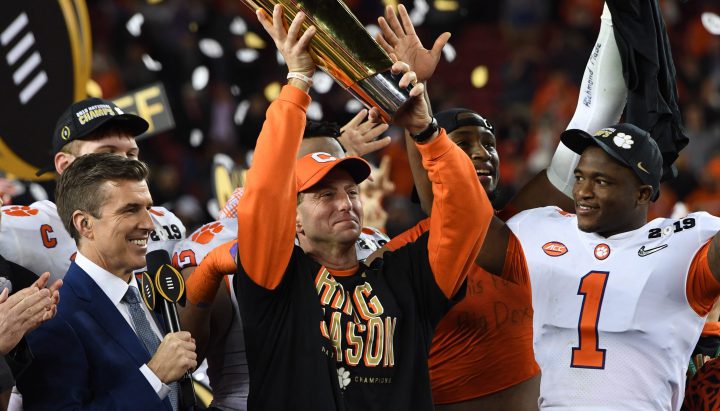 On the high school gridiron you are competing against one team comprised of 11 people.  In the world of recruiting you are competing against 1,00’s upon 1,000’s of other prospects.  Sometimes,  that is very hard for a college football prospect to understand.  Most prospects can only think about what’s around them locally.  Many don’t consider that their competition for the scholarship from the schools that they want extends beyond their region and onto a national scale.  What also happens,  especially to kids in what are considered “hot beds” for talent,  is that those prospects in those areas become delusional about their level of worthiness.  It’s easy for kids from Florida, Texas, Georgia or California to think that if I am good locally,  then I am the better than mostly everyone else in the country.  That’s faulty thinking.

What can guard a recruiting against that faulty thinking is developing a competitive spirit.  Many have a false idea of what competitive spirit is.  Often times,  young prospects think that a competitive spirit means on game day they go hard against their opponent and thus they are “competitive”.  That’s not how that works.  When you have truly developed a competitive spirit,  you are not ok with coming in second at anything you engage in.  That means you don’t like finishing second in the lifts in the weight room,  the sprints on the field,  knowing the playbook, video games and especially in the classroom.  A competitive spirit is a mindset,  it’s an attitude and once you develop it you find yourself working hard to be first at everything.  This means a game of checkers,  a trivia contest or even a friendly holiday game with the family.  When you fail you figure out how the game works,  you go harder on the factors that have proven to work and you get things done.

Having a competitive spirit does not mean that you know how to get mad when you lose.  I’ve seen people describe someone who throws a tantrum when they lose as being “very competitive”.  We’ll see that a lot in the game of baseball when a guy goes nuts in the dugout after he strikes out.  Well going nuts about taking a ‘L’ means nothing if that tantrum is not followed up with solid action to avoid a similar occurrence.

When you are playing sports,  you will lose sometimes.  What’s important is that a lesson is learned with each failure and that it is followed up with action to close the door that allowed the loss to happen.  Simply having a tantrum won’t do it.

So how does this help you when it comes to recruiting?  When your competition comes in the form of 1,000’s.  The elements on which you are judged on become plentiful.  College football coaches must dissect a number of factors to pair down a list of 1,000’s into a handful that they will offer scholarships to and ultimately accept commitments from.  With that in mind,  a competitive spirit will force you to study hard for your ACT and SAT tests.  Remember,  you just hate losing.  You won’t let a standardized test knock you out.  You will go harder in the weight room because you want the biggest bench press,  the highest squat or the heaviest power clean.  You will also get mad about someone considered as having better character than you and you will do something about cleaning up yours.  Overall,  you will see that you are a 4 star and want to be a 5.  You will see that you are ranked 100th and want to be #1.  You will not only want it but you will actually do something about it because it upsets you so much.

There’s the old and very truthful saying that goes ” how you do anything is how you will do everything.”  People with a competitive spirit take pride in everything they do because coming in second is the worst thing in the world.  This mindset will only work wonders for you in life whether it’s on the gridiron or any other place life takes you.