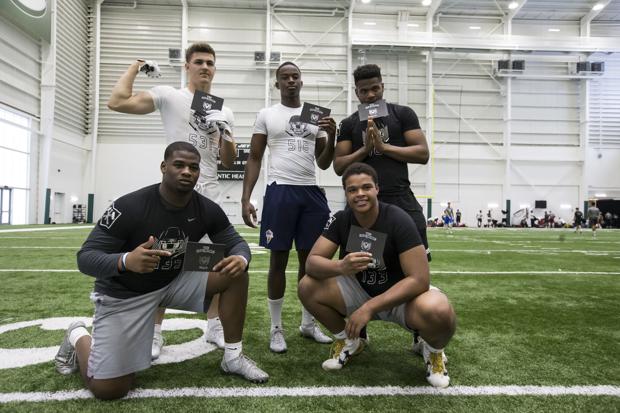 It’s camp season and it’s also 7-on-7 season.  Along with the high speed athletic workouts and amazing physical feats comes a ton of disappointment.  Camps pick MVPs,  they hand out invites to bigger camps and 7-on-7 teams have tryouts.  With that being the case, a lot of prospects are going to fail to hear their name called and fall short of their goals.

When you are young and full of testosterone,  admitting failure is hard.  Accepting it is even harder.  One of the most common ways we cope with failure as human beings is by criticizing the system.  Nothing soothes us more than by making our failure the result of being cheated by those running the show.  Perhaps the temporary relief of calling out the short comings of others can keep our egos from being eternally bruised but there’s a danger in extending our arms to finger point.

Finger pointing can become a nasty habit that eventually preps you for failure in almost every big time situation.  Over time you can enter every big competition waiting to get “cheated” so you can be ready to not be harmed mentally by the failure.  You don’t need me to tell you that this is a “weak” mentality.  Most of you will say that you never act like that and most of you would be lying.  As we grow older,  most of us tend to come to grips with our shortcomings.  Through this enlightenment we either do the work we need to do to change them or we learn how to get by in life despite them.  Here’s the hard thing about this when it comes to football,  it’s a young man’s game.  Football is not going to wait for you to get to 40 years old and figure this out.  By then you don’t move as fast,  you are not as energetic and your knees hurt.  So this article is here for you to think like a 40 year old in a young man’s body.

Having worked many football combines, camps and coaching on South Florida Express’ 7-on-7 team for five years,  I heard time and again, “they already had their guys picked before we got out there.”  I would hear this coming from guys who had zero chance of making the team based on their skill level.  They would not have made the team if they were the only one at the tryout.  With that mentality,  they won’t make the team next year.  Why? Because their thought process won’t bring them back bigger, stronger and more skillful next season.  They already have their excuse ready.

Here’s the truth of the matter.  Combines, camps and tryouts already have a list of guys that they know or have reason to believe are great players.  Right or wrong,  certainly players have attained a certain level of notoriety and status.  Some may have had great seasons,  may be already ranked or quite honestly,  they “look” like great players.  The people running the camps and tryouts have to have an idea going in as to who the top players may be.  You simply can not evaluate everyone based on one day of competition.  Imagine you have a tryout and Julio Jones is off of his game that day for some reason.  Do you ignore everything he’s done up to that point and leave him off of the roster?  How many people will call you stupid?  How would you feel if another team picks him up and uses him to beat you?  Imagine if we all judged Tom Brady off of this last Super Bowl?  Would we have missed the mark?  Of course we would have.

So here’s the deal,  when you enter a camp or tryout without the big name,  you have to perform on that day.  Being lights out still may not get you on the team or picked as a MVP but you have no chance at all if you don’t perform on that day.  Sure,  you may have outperformed Bill Five Star on that day but remember,  he already had a resume coming in.  On any given day Josh Rosen can out perform Aaron Rogers in a single game but what about over the course of a season?

If you perform well and don’t make the cut,  chances are that you got someone’s attention.  Take the failure and internalize it.  Go home and get faster.  Hit the weight room and get stronger,  get in the film room and get wiser.  Get on the field and get more skillful.  Show up next year as the improved you.  When you come through the gate,  that coach will remember you from last year and puts a star next to your name on his list.  That means he’s going to watch you more today than he will the other 7,985 prospects at the camp.  When you unleash your improved skills from last year,  that coach is going to go to bat for you.   Now you’ve become that guy that the others will hate on because you got picked before you even got out there.

Successful people internalize their failures and seek opportunities to point the finger at others when they achieve success..  Who do you want to be?