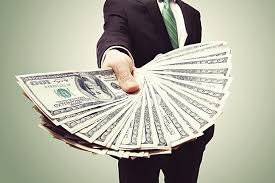 The NCAA announced their revenues last week and all hell broke loose.  $1.1 billion is a huge number.  It’s an emotion evoking number.  Billion is a word that absolutely raises eyebrows.  A billion anything makes you turn your head.  I hope I’m dead and gone by the time that number becomes ho hum to society. So with that,  the number $1.1 billion was a glass of ice water in everyone’s face especially the “athletes need to be paid advocacy groups”.

Has anyone read the stories of the lotto winners and what life is like after they get their check? Once people start counting their money,  they’re are dead.  Here come the aunts, uncles, cousins, lawsuits, etc.  The NCAA had no choice but to announce the revenue but now here comes the student-athlete advocates who think college athletes need to get a check because,  well,  those thugs in the NCAA are getting rich off their backs.

I’ve argued about this topic ad nauseam on social media.  Before I start,  let me just lay this out because people just love to argue.  I wholeheartedly agree that student athletes should have all of their expenses paid for.  We know their classes and books are paid for,  that’s never in dispute.  However,  any situation where players’ rent checks can’t cover the rent and utilities or any situation where food is not supplied in plentiful amounts is a travesty.  Wherever that exists,  it should be rectified.  An off campus check that comes up hundreds of dollars short of reasonable rent costs is an abomination.  So if that is your argument,  you can rest easy because I am with you.  I also agree that players should have enough money to travel back home reasonably when there are holidays, vacations, etc.

With that said,  my issue is with the athletes should get a check or revenue share of the NCAA profits folks.  Stop right there.  First of all,  most of you didn’t go past that $1.1 billion revenue headline.  You can lie to me but you can’t lie to yourself.  That’s the social media timeline world we live.  We don’t click on the stories because the headline is all we need to formulate a granite hardened opinion.  When you have some time,  read an article on how the NCAA both acquired that money and then how they distributed it.  I don’t want to bore you with numbers because most of us don’t care about numbers until our bank account says zero or you hear that someone made a billion.

My stance by and large is this and many of you may not like it.  The NCAA built this thing.  Over the years they have grown it and turned it into the grand corporation that it is now.  In the process,  it has developed a major platform for student athletes that the savvy ones can use to benefit from handsomely once graduation comes. College student athletes get more exposure now than ever before.  College athletes are celebrities now more than ever.  College institutions and their teams are more known now than ever before. Has this come as a result of the blood, sweat and tears of the athletes? Yes it has.  Has it grown to this outstanding level as a result of the various contracts, partnerships and deals that the NCAA has pushed for and negotiated?  Yes it most certainly it has.

Forward thinking student-athletes think about their future and also have a backup plan.  The greatest athlete can have his career ended in a second. The most talented college athlete may find he’s no fit for the pros.  As such,  forward thinking young adults (the ones we want running the country in years to come) will prepare for their future. They will accept the very valuable education that when all is said and done will cost upwards of $250,000.  They will use their personal celebrity status or that of the team to network with important people in their field and exploit that relationship upon graduation.  Can you be a biology or engineering major as a college football player?  Probably not.  Can you adjust yourself to another suitable major then attend grad school (which you would’ve wanted to do anyway)? Yes.  Does football teach you to cry when you can’t get your way? No.  Does it teach you to find a way when their doesn’t appear to be an obvious one. Yes?  Is this not a successful skill to cultivate for life’s journey? Yes.

For those of you counting the NCAA’s money and saying these college athletes need to get paid.  To those of you thinking 18-22 year old students getting a free education should pull some game checks,  my message is for you and the players that might be listening to that. College football is tough.  You will work hard,  the hours will be long and thoughts of quitting will enter your mind.  Take advantage of the free education you’re getting from institutions that 1,000s up on 1,000 of others were denied entry to and when accepted had to pay $1,000’s upon $1,000’s to attend. Realize that some of the athletes made it in with academic numbers that would not have come close to being accepted otherwise.

Paying college football players would be like setting up a welfare system.  People want money just for showing up.  As a college ball player,  they haven’t done anything yet.  Start putting some money in their hand and there goes some of the motivation on the field and most certainly off of it.

College is for the grind,  not for the comfort.  As long as the student-athletes are comfortable, their mind is off of achieving.  A full stomach does not make a steadfast hunter and necessity is the mother of invention.  Make our students and our athletes comfortable and they need nothing,  they invent nothing which would include a post graduate career either as an athlete or other professional.  The little bit of money thrown the athlete’s way in college or handed to them afterwards will run out quick.  After that,  they’ll be left with the currency they built up during their college years which will likely be nothing because they were very comfortable.

College students need to embrace the struggle. The struggle won’t kill them and if they let it,  it will make them stronger.  The struggling actress waiting on tables doesn’t make it to the big screen one day by getting a huge cut of the restaurant’s profits.  That waitress is grinding while she hunts for her opportunity to make it big in film.

Someone out there is trying to sap the motivation of our young student-athletes. I’m sure welfare was created to help those who couldn’t help themselves.  Somewhere along the line it morphed into making able people comfortable so they would stop reaching for greatness. Athletes,  don’t let them do that to your career. If you’re hungry in college,  grind and hit those books.  The percentage say you’ll live a better life if you do so.

College is a proving ground for everyone from the students to the student-athletes.  It’s not a place for you to experience a windfall. If a regular student creates something exceptional like Facebook or Microsoft while in college, they can elect to leave school to focus on that business. Likewise,  the college football player can leave school early after three years to focus on football.  The three year wait is necessary as football is a sport that requires a certain amount of physical maturity.  I’ve heard the argument that regular college students are not providing anything that contributes millions of dollars to the school.  Oh, did you forget the tuition they’re paying?  Those numbers at a school like Alabama yield in excess of $770 million per year.

Young student athletes, your decision to attend college on a football scholarship was just that,  a decision.  This means you had a choice.  Our military members put their lives on the line and our government has trillions of dollars which many could argue that we waste.  Anyone up in arms about what they make?  They get education, medical and other benefits true but there’s no professional athletic career opportunity waiting for them at the end of their service.  Could the NCAA offer more benefits to their athletes? Perhaps and they may be indeed examining a way to do that while attempting to keep a level playing field.  After all,  they just announced the revenues a week ago.

To the athletes,  grind, hustle and be uncomfortable. That’s what college is for. When you become a pro,  whether that’s in athletics, business, etc.,  success will taste all the more sweeter.  Stop counting the NCAA’s money and focus on your plan to get yours with or without the pigskin.