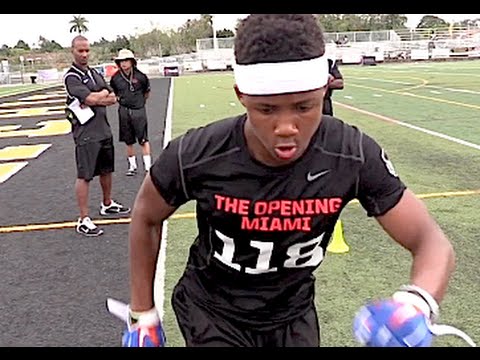 It’s that time of year.  Some call it the offseason,  a bunch of others call it camp season.  Recruiting camps as some call them will be plentiful and consistent over the next few months.  Some will make very bold promises about their ability to bring you recruiting exposure. Other camps will be expected to perform that task whether it is true or not.  Who knows who coined these camps by the phrase “recruiting camp” but whether or not they will get you recruited depends on your approach and what you expect going into them.

Offseason camps can lead to college scholarship offers but only if you take the right approach.  Here are three things a prospect needs to get from a college football recruiting camp in the offseason to make it a success.

The number one thing a college football prospect should get from an offseason camp is competition.  Some of the biggest and best camps around the country will bring out 100’s of kids from the local and surrounding areas.  Nothing else during the calendar year will bring together competition like Nike, Under Armour, Rivals or similar camps.  Your high school football district is your district.  You have to play the teams in your district and outside of that there are restrictions on the level of competition you play.  This is not the case at the camps.  Camps bring out the biggest and the best.  This is your chance as a prospect to see how you stack up.  This is your chance as a prospect to see what you need to work on.  What price would you put on that?  Of course,  you can take the approach of “those camps are political and full of bs” and just stay home.  That’s fine but you’ll just miss out on a chance to get better by competing against the best prospects in your area.  Competition makes you stronger,  it makes you better and for that reason alone you should attend as many of the well run offseason camps that you can.  Saying you are not going to any of the camps because it’s political and I won’t get an award is like saying I’m not going to any of the track meets because I won’t win first place.

At the offseason camps, a portion of the event is devoted to individual skill evaluation and development.  Sure,  if you are an advanced player who is experienced in the game and have received good coaching,  there’s less for you to learn.  However,  there’s always at least one new thing technique-wise that you can pick up from a camp.  Whether that is foot placement, hand placement, body control, eye discipline, leverage, etc.,  if you can go into the camp saying,  I want to learn at least one new thing that can improve my game,  chances are that you will find it.  Many other prospects will go into the camp with a real snobbish attitude and pretend that they know it all.  The truth of the matter is that you are 14-17 years old.  If you think you know it all about football then I can already write your future in this game and it won’t be pretty.  Open your mind to the adults and coaches that are there instructing you and I promise you can pull something out of it that will give your game a boost.

Very little gets done in the World of business where billions of dollars change hands without knowing someone.  Playing high school football and obtaining a college scholarship is your business.  If you want to run a successful business then you need to make contacts.  Before, during and after the event,  make it a point to meet people that can aid you in your core business which is getting a college scholarship.  Whether that is connecting with other talented players,  recruiting reporters, coaches from the event or even parents of kids who have received scholarships,  meeting these people and networking with them will help you reach your goal.  Outside of that,  learning how to and practicing networking is a skill that will aid you far beyond your years as a football player.  Most successful college students have mastered the art of networking.  Spending the time to talk to recruiting reporters or meeting someone like myself to learn more about the recruiting process has a value that’s far beyond anything you can measure.  Perhaps you make contact with someone who trains kids to play your position.  Getting together with that individual for some sessions or for consistent work can take your game to a whole different level.  Many times,  I have been approached by young defensive backs at camps who learn more about what I do with AllEyesDBCamp.com.  Some have become consistent members and I’ve watched their performance take off to the college scholarship level.  Make contacts at the event that will help you for years to come.

None of the three things I mentioned above can happen if you stay home during the event because you have the attitude that you won’t be picked for any top prize.  Some prospects will refuse to go if they are not invited.  I know that pride is a huge thing in teenagers.  However,  pride can be a serious barrier to success.  If you are an underclassman that is not invited to an event when there’s a chance you can go in future years,  then I recommend you attend as a spectator.  Being a spectator will serve two purposes.  First of all,  two of the three things I mentioned above can still be accomplished (Technique and Contacts).  You can observe what the guys at your position are being taught and take notes.  Or you can observe what the players you go up against are being taught and learn.  So for instance,  a defensive back can watch the WRs and hear what they are being taught to beat DBs.  You can’t really do that if you are invited to the event because you’ll be with DBs the whole time.  Offensive lineman can watch the techniques being taught to defensive linemen and become more aware of how they beat you.  You can also still make contacts and network at the event if you weren’t invited.  Not being invited does not stop you from meeting important people that have to do with your business which is getting a college scholarship.  Finally,  going to the event when you’re not invited and watching the others should motivate you greatly to make it next year.

If your sole purpose for attending an offseason recruiting camp is to get a scholarship offer or be picked for the MVP team then you stand a great chance of being disappointed.  The offseason camps have 300-400 prospects in attendance with only 10, at most, being picked as MVPs.  However,  if you apply the principles I outlined in this article you can get so much more out of attending the event than you thought possible.  If nothing else,  you will put yourself one step ahead of the 300 other kids who will leave the event pouting like a 7 year old who was told he couldn’t go to McDonalds after his football game.