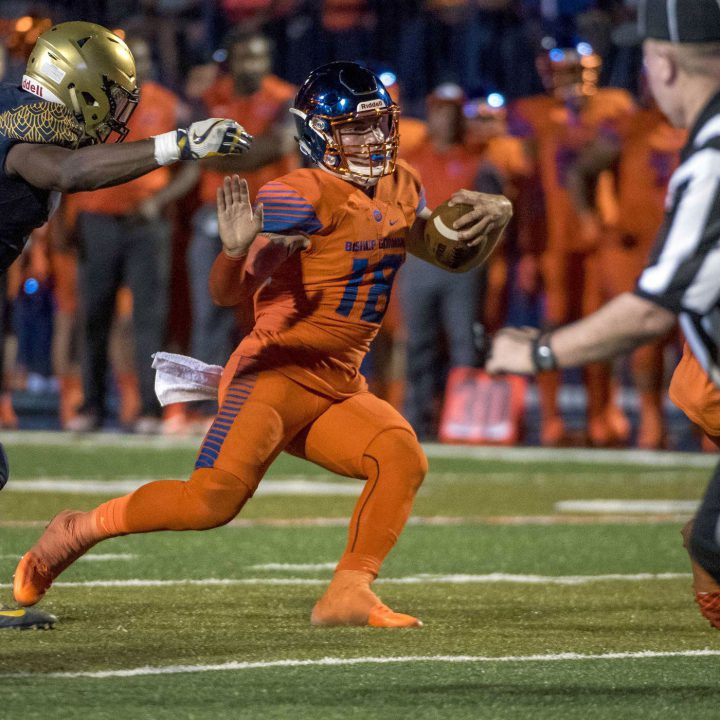 We’ve all played Madden on Play station and or Xbox right?  You know what the most annoying thing is on the game?  I know you are going to feel me on this.  It’s when you have a player on the field that is doing some really good things,  doesn’t make a simple play and finds himself out of place.  It will drive you nuts.

On the Madden game,  a player has a ton of different attributes like speed, quickness, route running, tackling and the all important one called….. AWARENESS.  Lack of awareness will cause a player to make some funny moves,  terrible decisions and end up totally out of place.  It’s funny,  these same things will happen to you as a recruit if you lack self awareness.  For most human beings,  self awareness is a tough thing to acquire.  It is extra hard to acquire this skill when you are a teenager.  You are at the age where you feel like you can do all things and while you should be encouraged to do so,  it is crucial that you know your limitations.

One of the biggest reasons that the transfer portal is choc-full of athletes right now is because high school football prospects lacked the self awareness necessary to make a proper decision.  Now they are athletes at a college that is not suited for them and they are realizing it.  Aside from lacking the experience that gives you better self awareness,  having this skill is often not something that teens find to be very important.  On top of that,  it is important for your psyche for you to keep up with your peers. You also have people blowing your heads up with how great you are.   Yes,  welcome to the new era of college football recruiting where you can go viral and become an overnight sensation off of one play in a 7on7 event vs. a kid that will never see a college football offer in his life.

What’s important for you as a prospect is to keep a level head despite the fact that there are so many ready to pump it full of air until it explodes.  You are never as good as people may be saying and you aren’t as bad as your worst play.  Having an accurate picture of who you are will put you in the best situation when it comes time for you to make a commitment to a program for the next three to four or even five years.  Don’t get fooled by that safety net known as the transfer portal.  This new era of college football prospect thinks that it’s the big eraser for them to use when they bubble in the wrong letter on the college choice scantron.  The problem with this is that so many athletes are using the portal now . This makes your prospects of going to your next school of choice or even to another school on scholarship less likely.

The best thing that you can have happen to you is choosing a school,  making a commitment,  going to that school and staying there until completion.  Of course,  I understand that some circumstances can be out of your control like coaching changes but for the most part,  the portal entries are as a result of a poor initial decision.

Here are some keys to having the proper self awareness necessary to make the best college choice as a prospect.  First,  stop worrying about what the next prospect is getting.  Whether it is a friend,  teammate or cross town rival,  what another prospect is getting in terms of offers has nothing to do with you.  Nothing can make a person lose their place like focusing on that of another.  For all you know,  the offers that the next guy has are not legitimate or the school he chooses is not right for him.  Do you want to follow that?

Second,  do some research.  Check out what type of players, at your position,  the schools you are considering are recruiting.  Check out what type of players have been successful for them in the past.  If the school has been successful with 6’2″ wide receivers in their offense and you are 5’10”,  it is something to think about.  Coaches will stick with what has worked for them.  They will crave the type of player that has gotten it done for them.  Sure,  you may break the mold and it’s great to be bold but be smart about it.  It can be frustrating to be doing well and get put on the back burner because you aren’t their ideal candidate.

Finally,  constantly evaluate what you are as a prospect.  This is the hardest part because it is routine to overestimate our skill level.  However,  where you can,  use hard metrics to make comparisons.  How tall are you?  How fast are you?  How much do you bench? How much do you squat?  Watch film of a team’s commitments then watch your film.  Do you really stack up?  Ask that question constantly and answer it honestly.

In closing,  ego is a big thing when you are a teen but I am telling you from experience,  a lot of times the most popular guy in school,  the one voted most likely to succeed  has hit their peak in high school.  A lot of times,  it’s guys that had to grind,  take a round about path and absorb some lumps that are the ones on top when adulthood hits.  Don’t let your ego make you run out of bounds when you are in the open field with a clear path to the touchdown of life because your awareness rating is not up to snuff.