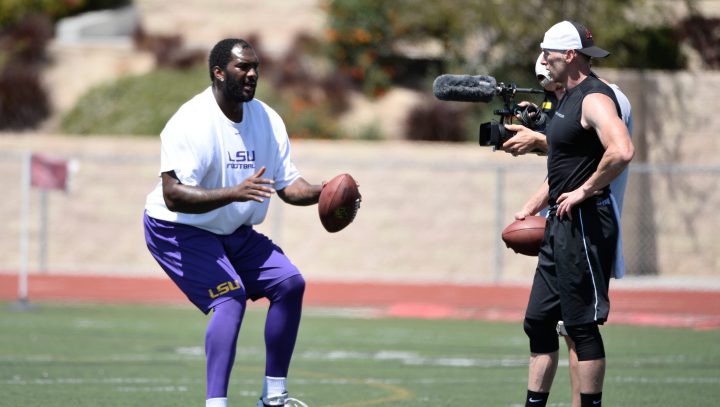 When it comes to recruiting high school football players to college football programs,  there are a host of reasons why a particular recruit may not get the final nod from a coaching staff to the school of their dreams.  It can range from being too short to too slow to not having the required grades to make it in.  However,  there is one element over all others that will sink a recruit in the college football recruiting game.

Virtually all of the reasons that most of us hear as to why a player won’t get an offer can be overcome.  If a player is too short he can develop elite speed.  If a player is too slow,  he can acquire outstanding instincts.  If his grades are too low he can study and get them higher.  When we are talking about words like develop, study and acquire they all involve work.  Every recruit is going to have holes in their game and areas that need improvement.  For a prospect to reach his potential,  work is needed or he will undoubtedly fail to reach his potential and be a disappointment.  So with that in mind,  above all else,  the worst thing a recruit can be is lazy.

What I encounter quite a bit in a recruiting hotbed like South Florida are a lot of physically talented athletes.  For those who show their talent at a very young age,  remaining motivated to improve can be a challenge.  For some,  the moment they put on the pads,  they were dominant or at least one of the best players on their team.  It is great when you have been blessed with God given speed, size and talent.  However,  these things will only take you so far.  As you progress through the game,  you will encounter more and more physically talented athletes and less guys that you can dominate on talent alone.

What separates the goods from the greats and the good from the average is work ethic.  A lazy player is of low value.  First reason why he is of low value is because he doesn’t tend to improve.  The second reason is that laziness can be contagious.  The last thing a football coach wants is something in his locker room that will infect his football team.  Having gone through a global pandemic like Covid-19,  I think we can all identify with removing an infected member out of a group.  The same way that individuals who caught “the virus” had to be removed and quarantined,  is the same way that a coach will not want a lazy player’s work ethic infecting the rest of the squad.

Don’t get me wrong,  if a prospect is supremely gifted physically,  a school may take a chance on them in hopes that their lazy nature will turn around.  However, if it comes down to you and another prospect for a spot in the recruiting class,  I can guarantee you that they will take the guy that is not lazy.  College football is hard work.  Between workouts, meetings, practices, classes and tutor sessions,  a lazy player is just not going to make it.  If you are lucky enough to get on the roster of the school you want,  you can bet that if you are lazy,  you will get buried on that depth chart and dig a tunnel to the transfer portal.

With all this in mind,  if you have any lazy vibes,  get rid of them ASAP.  Start making a schedule.  Schedule out your time and stick to it.  Get used to getting up early even on the weekends.  Get used to doing things you may not want or like to do because that is a part of growing up and becoming successful.  Your talent will only take you so far and you don’t want to find yourself surprised when the talent runs out and along with the attention from college football coaches.