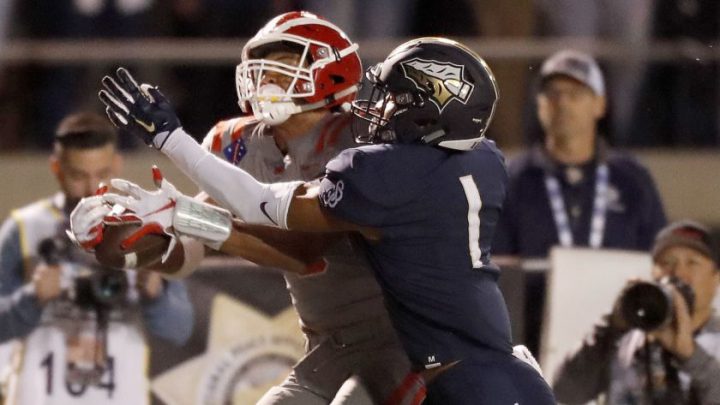 It’s that time of year.  The time of year where folks anxious for the football season to start begin ranking things related to football.  Lately,  I have seen a lot of rankings related to the states that produce the “most” football recruits and it had me wondering.  What states produce the most elite football talent in the country right now?  So I set out to do some research and found a few surprises.

First let’s talk about the methods I used.  In my experience playing,  coaching and training I have determined we can determine what is elite talent by four factors.  Where do the players come from on the top ranked recruiting teams.  Where do the top ranked players come from.  Where do the players come from on the championship teams each year and where do the players come from that are at the top of the draft.  Since high school football,  college football recruiting and the NFL draft are such fluid situations,  I only used data from the last three years to achieve my rankings.  I also only used the Top 5 schools by recruiting rank and the Top 5 players from the last three completed ranking classes (2019, 2018 and 2017).  Finally,  I only analyzed the last three NFL drafts (2019, 2018 and 2017). This,  in my opinion,  gives us the clearest picture of what is happening now.  Spreading this net too wide and we risk including data from teams and programs that are no longer as strong or as relevant thus clouding the current picture.

There is no real way to be “scientific” here without going overboard so I kept it simple.  How many players from each state comprised the signing classes of the Top 5 ranked recruiting classes over the last 3 years.  Which states were represented amongst the Top 5 recruits over the last three years.  What states made up the starting rosters of the last three national championship teams (Clemson, Alabama and Clemson).  Finally,  what states represented the top 5 NFL draftees over the last three years.  After gathering that data,  I sought to determine,  which teams appeared the most in those factors and ranked the highest in those factors.  Why did I only use the Top 5 team rankings, player rankings and NFL draftees?  I did so because I am seeking to find out who produces the most “elite” talent,  not just the most college football players or drafted NFL players.  As we know,  many college football players and many NFL players don’t pan out.  Also,  we know some states are more populated than others so that can cloud the numbers as well.  My aim was to determine who is producing the most elite talent currently.

With that said,  here are the results:

The per capita boys check in at number five on this list.  Yes,  Louisiana is still producing the most amount of NFL talent per capita in the U.S. but in terms of elite talent,  they are looking up at a few other states.  Nonetheless,  this is still impressive considering the size and population of the state and the fact that there was a mass exodus following Hurricane Katrina.

The boys from California only ranked in one of the categories and that was in the Player Rankings category.  Fortunately,  the ranking was number one as they tied with Florida and Georgia for that spot.  Over the last three recruiting cycles,  the state of California has produced three Top 5 picks. Those players were Oak Christian’s Kayvon Thibodeaux who signed with Oregon in 2019.  California also produced the #1 ranked recruit in the country in 2017 with Jaelen Phillips from Redlands East Valley (UCLA) and Najee Harris from Antioch High School who signed with Alabama also in 2017.

The Sunshine State has often been a leader in producing Division I signees and NFL draftees but when it comes to producing the most elite talent in the country right now,  they are not holding that top spot.  Let’s look at where Florida is strong.  In terms of producing Top 5 ranked players in the country over the last three cycles,  Florida is tied with both California and Georgia for that spot with three since 2017.  Alex Leatherwood in 2017 from Washington HS in Pensacola signed with Alabama,  Xavier Thomas from IMG in 2018 signed with Clemson and Nolan Smith from IMG in 2019 signed with Georgia.   Yes,  I can hear the Florida haters now,  but but but Thomas is originally from South Carolina and Smith transferred from Georgia. I hear you but we made no other distinctions for anyone else in the rankings from any other states.  Let’s face it,  transferring is an art form in this day in age.  IMG is in Florida and pumping out top talent.

What kept Florida out of the top 2 spots in the rankings was failing to crack the top 5 in providing starters on the last three national championship teams. Only six Florida players have been amongst the 22 starters for the last three national championship teams.  This falls behind states like North Carolina and Virginia.  Of course,  having Clemson be the national champs in two of the last three seasons plays a big part in this.  The other surprising category that Florida failed to get into the Top 5 in was producing Top 5 picks in the last three NFL drafts.  Only one player hailing from Florida has had that honor and that’s Nick Bosa taken 2nd overall in the 2019 draft.  His brother Joey was taken 3rd overall in 2016 but that falls outside of the time period for these ranking.

The great state of Texas comes in 2nd on the list.  Many will argue that they are here because sheer size and while that certainly plays a part,  Louisiana has shown you the size isn’t everything.  Texas only ranked in two out of the four categories for this endeavor but it pays to rank #1 which is what Texas did in both of the categories.  In terms of producing players on the Top 5 recruiting classes over the last 3 years,  Texas was an easy #1 having doled out 67 players in those classes.  It helps that the University of Texas had the #3 ranked class in 2018 and 2019 and that Texas A&M slid in at #4 in 2019 also.  However, there’s more to the story than that.  Texas has pumped out talent to everyone in the Top 5 over the last three years.  USC, LSU, Ohio St. and Michigan have all inked prospects from the Lone Star State to help bolster signing classes into the Top 5.

The other #1 ranking for Texas came in producing Top 5 picks in the NFL draft.  Over the last three NFL drafts,  Texas is #1 in producing three (Kyler Murray, Baker Mayfield, Myles Garrett) out of the 15 Top 5 picks over that time.  20% of the Top 5 picks since 2017 are from the Lone Star State.  Falling outside of the Top 5 in the categories of supplying starters to the last three national champions and having Top 5 ranked recruits cost Texas the top spot.  However,  when Texas ranked,  they ranked big.

Many of you would be surprised by this.  Perhaps you had your mind set on Florida, California or Texas holding this spot.  I have to admit,  I was too.  I was surprised just how much Georgia just kept showing up in everything I researched.  Georgia was the only state to rank in three out of four categories.  They also tied with Texas in grabbing a #1 ranking in two categories.  Let’s take a look.

Georgia came in 2nd to Texas in producing talent to the Top 5 recruiting classes over the last 3 cycles.  Texas had 67 and Georgia had 54.  Florida finished 3rd with 44.  That’s quite a bit of top talent on top recruiting classes.  The Peach State tied with Florida and California for the top spot in producing Top 5 ranked players over the last three recruiting cycles.  All three states were able to produce three each.  For Georgia,  those players were WR Jadon Hazelwood (OU) from Cedar Grove in 2019,  QB Justin Fields (UGA/OSU) in 2018 and QB Trevor Lawrence (CLE) from Cartersville also in 2018.  Lawrence was the #1 ranked player overall that year.