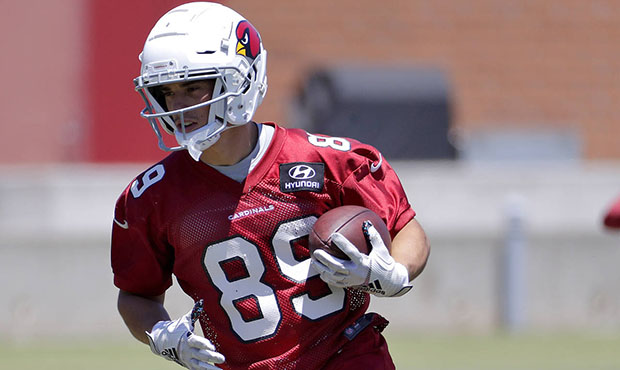 (pictured: 5’9″ Andy Isabella who was the state 100m champ in high school and attended U.Mass. He was the 2nd round pick of the Arizona Cardinals)

We all have our deficiencies in life.  Pick someone and you can find one.  What separates the haves from the have nots or the successful from the not so successful is how they handle the setbacks that come from lacking that required ingredient.

Every recruiting cycle some recruits are left to deal with the fact that they did not receive offers or sign a scholarship.  Assuming that they were indeed talented enough,  the biggest reason for this happening is related to size and in particular,  lack of height.  Often times these recruits take to Twitter to express their disappointment, anger and displeasure with their situation.  What I have found during my time involved in the world of recruiting is that lack of height is a problem that for many,  has a solution if they are willing to tackle it.

When you’re lacking an important element while pursuing something important,  it is essential that you either seek to acquire that element or be very diligent in having an abundance of the other elements that are required.  Also key in pursuing a goal when the necessary tools aren’t readily available is being willing to take an alternate path to success.  Let’s take a look at four solid ways to overcome a lack of height in the recruiting process.

There are some areas in life where complaining may yield the desired results.  I’m here to tell you that recruiting is not one of them.  Running around on social media complaining about your lack of offers because you don’t meet the height requirements of the schools you would like to be recruited by is a mere distraction from what you should be doing.  A coach that has been sent out to find 6’4″ defensive ends is not going to suddenly change his mind about you being 6’1″ because he read your 147 tweets proclaiming you to be “slept on” because you are undersized.  The constant cycle of running around crying about your lack of recruitment because of lack of height is toxic.  It only serves to cook up your negative mindset.  Eventually,  it takes over and you start to fall off in all areas.  Time spent complaining is better spent trying to find a way to get an edge on your opponent and measure up to the competition in other ways.  Try walking up to a wall that’s very high and start complaining about it.  Let me know if you ever reach the top.

I bet you think this relates to the people who say “you won’t make it”.  No,  I am not talking about them.  I am talking about people far more dangerous than them.  I am talking about the people that want to go cry on your behalf about the lack of attention you are getting.  Yes,  those people are some of the worst of all.  They might be your little league coach,  it might be your high school coach,  it might be your “mentor” or it might be some crackpot recruiting guy.  If any of the crying they are doing on your behalf is not combined with encouraging or demanding that you put in extra work then they are one of your biggest enemies.  Frequently,  those deputy complainers will ignore the fact that along with your lack of height you are deficient in other areas too.

High School football IS NOT college football.  I watched a 6′ 180 lb. defensive end get 32 sacks one year in high school football.  Guess how many he would get in college?  College scouts must make projections on your future because they know it gets a whole lot harder at the next level.  They are more experienced in knowing what your struggles will be playing college football at your height than your mom, pop, little league coach, mentor or Mr. Twitter Recruiting guy.  While they are doing all this complaining for you,  they are draining your positive energy and contributing to your demise.  Do yourself a favor and mute them. Take ownership of your situation.

3 – Be Exceptional at One or More Other Things

There is nothing you can do about your height.  It is what it is as they say.  What really boils my blood is when I watch a height challenged prospect refuse to be in the weight room or won’t run track or have a hard time watching hours of film.  These are the things you need to do to make up for your shortcoming (pun intended).  I have known plenty of undersized recruits who have felt that despite their size,  they should be getting scholarship offers because “I’m making plays” or “I’m ballin”.  Again,  high school football is not college football.  We all know guys who balled in little league and disappeared when it came time for high school.

If you aren’t willing to put in the overtime at being exceptional in the other areas then when I hear you crying about offers,  my thought process is “please shut up”.  If you play a skilled position and lack height,  go run track and work hard at it.  There’s nothing like a 10.6 100 meters to make a recruiter look beyond the fact that you are 5’8″.  If you lack height in the trenches then there’s nothing like a 350 lb. bench press and 450 lb. squat to overlook the fact that you aren’t 6’3″.   If you are a linebacker that’s 5’11”,  there’s nothing like a 350 lb. bench press and knowledge of the playbook on the level of your coaches.  When you lack a required element, seek abundance in the others.  Complaining about what you lack won’t get it done for you.  It makes you undesirable.

4 – Be Prepared to Take A Different Route

If you’ve busted your tail to be the best player you can be and still,  the big boys aren’t throwing the scholarship offers your way then you have to go a different route.  Basically,  you may feel like you have proved yourself but you’re just going to have to prove yourself some more. If I brought you a rusted 1989 Chevy and told you it has a great engine,  you are going to want to see the CarFax right?  Well,  sometimes you will just have to show your CarFax.  Perhaps Clemson or Alabama is not your route.  You will have to remain motivated and go to a smaller school.  You will have to continue to develop yourself in those other areas that are required and that you control (strength, speed, intelligence and character).  Many a NFL player have come from the ranks of sub Division I-A football.  Some have even become Hall of Famers,  many more have had wonderful college football experiences and graduated with a degree.  Have Plan B ready and be ready to execute it.

Following these four steps will have some added benefits too.  Should you fall short of your D1 college or NFL dreams,  you would have learned something about hard work,  perseverance and determination.  Those skills will undoubtedly yield you success in your next chosen pursuit.  You know what won’t get you up that ladder of success?  Complaining.  Save your tears and your slept on tweets.   The time to get to work is now.