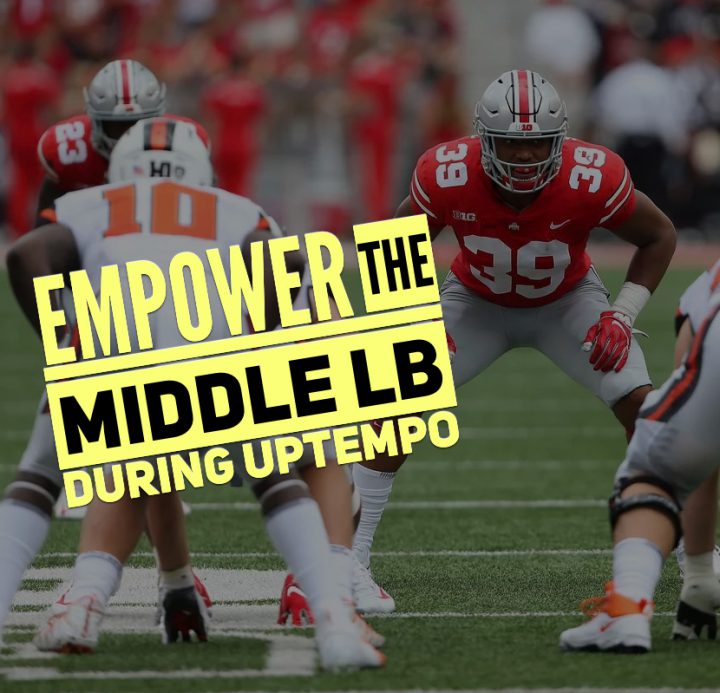 When teams want to throw you off as a play caller for the defense they will resort to the tactic of hurry up offense.  There are times that you will be inside of the offensive coordinators head with your calls and you seem to be one step ahead of him.  A good offensive  coordinator will reclaim his edge by moving to an uptempo offense to change your play calls and get your defense to line up wrong.  There’s one good way to counter that counter and this article will talk about that.

There are three reasons why hurry up offense works.  First is it fatigues the defense which leads to blown assignments and missed tackles. Second,  is that it causes mis-alignments which leads to big plays because the defense is out leveraged.  Third is it causes miscommunication which leads to big chunk plays in the passing game as receivers are left wide open.  Regarding number one,  thats on you as a coach if your team is not in shape enough to handle an uptempo offense as virtually every team has it in their repertoire.  Reasons two and three can be severely eliminated by doing this one thing and that is turning the play calls over to your middle linebacker.  Why the middle linebacker?  Because he’s typically the brains of your operation and the one who calls the signals in the huddle.  If he’s not for some reason then give the play calls over to whoever that signal caller is (aka the guy you trust the most).

I know what I just said is like a guy giving his girlfriend his cell phone (pretty scary) but it’s a must.  Unless you absolutely don’t trust your Mike backer,  putting the power to make the calls in his hands helps the defense in several ways.  First,  it limits the whole defense having to look over to you or the signals coach to get a call while the offense is getting ready to snap the ball.  Second,  it gets everyone on the same page more likely.  Finally,  it limits the playbook which is a good thing when teams go fast.

Against a hurry up offense,  the best defense is the one where all 11 men on the field know what the call is.  Signaling in the defense from the sidelines in a haste causes problems.  First you must choose the defense,  next either you or the signals coach has to signal it in.  Then the you have to hope that all 11 players see the same thing and echo the same call around.  By then the ball is snapped and the players have little chance to decipher their assignments vs. the look to go play with any amount of speed and confidence.

So how do we set up the play calling controls for the middle linebacker?

As a defensive coordinator,  I experimented with 5 calls, 4 calls, 2 calls, etc.  After trial and error,  I settled on three options as the best for the player to choose from.  If you have a really smart Mike AND a pretty experienced unit you can throw a 4th call in there.  Yes,  I know shortening the playbook makes you feel like you are in prison but guess what,  the offense has shortened their playbook too.  They are simply hoping you line up wrong vs. one of 3 or 4 plays they want to run.

Within those 3 options,  you want to give the MIKE a zone call, a man call and a blitz call.   This gives him a range within the curtailed set of options.  He can now match the defensive type to the situation.  This is where you will do your best coaching.  Since in this situation you are removed as a coach on game day,  you replace it with your coaching during game week.  Discuss with your MIKE the possible scenarios that could occur and what call best sets the unit up for success in the given situation.  Your MIKE should be able to think like you but given his IQ and experience,  let him know he has a certain amount of freedom.  Yes,  I know for the college coach making $500,000 to $1.5 million annually,  the thought of a U-Haul truck pulling up to the front of your house because of calls made by an 19-22 year old frightens you.  Relax,  that kid might call a better game than you in this situation especially if you have done a good job coaching him.

Regarding the actually kind of calls.  Your zone should be your best zone.  Is your team best in a 1 high Cover 3 concept?  Is a split safety coverage where you excel?  Your man call should be the one where your unit is most comfortable.  Remember,  they will be fatigued a bit.  You don’t want to mix discomfort in with fatigue.  Finally,  the blitz should match up with the objective.  Are you trying to stop a run play with the blitz or a pass play?  Is the QB a pocket passer?  if so then you might want some kind of double A gap pressure.  Is the QB great outside of the pocket?  Then you may opt for bringing edge pressure.  This call will likely change from week to week.

(3) Give the Calls Simple Names

Give the play calls a one word name.  Trust me on that.  Don’t go getting complicated.  Remember on offense during uptempo,  simplicity works.  This applies to you on defense.  For example,  “Migos” named after the popular rap group can be your Cover 3 call.  There are 3 members in Migos.  Your young group can appreciate that and will prefer that over you calling Cover 3 “Run DMC” (who also had 3 members) who is old and has two words in it.  “Hulk” could be a blitz call and “Lebron” could be your Cover 1 call because to this generation,  he’s #1.  If you really want to do this right,  you let the MIKE come up with the names for the call.   It will make it more fun and the unit will embrace it.

Now you need hand signals because on top of calling it out,  he must also signal it for the guys that are far away from him like the secondary. The defensive line can look forward at the offense and hear the call while the secondary can eyeball the MIKE for the hand signals in the event that they can’t hear him in a crowded stadium.  Simple hand signals are best.  Touching a part of the body,  raising a hand in a certain direction,  etc.  If you don’t have ideas,  go watch a first base coach signaling to a batter in baseball.  LOL.

Now you need the dress rehearsal.  In the meetings you must present to the MIKE and the whole defense the scenarios and what you think works best.  You must also ready the team for scenarios like the offense switching suddenly from a regular offense to hurry up.  Is there a safe call for that scenario that you automatically call just to make sure you are lined up right and in position?  It’s probably best to have that and make it known to the MIKE that this is the call on that first hurry up play.  Also,  cover the objectives each week and go over constantly what calls have changed each week.  You don’t want to change all the calls each week.  Again,  the objective is comfort which brings confidence and allows your unit to play fast.  Finally,  you have a 2 minute session in practice and let your MIKE go to work.  My signal to the MIKE when we were in hurry up was to simply point to him.  That meant “your on! It’s your turn”  Sometimes it’s best to launch that 2 minute period in practice without warning.  This preps the mind for the sudden change, chaos and pace that could occur in the game.  Preparation is key. 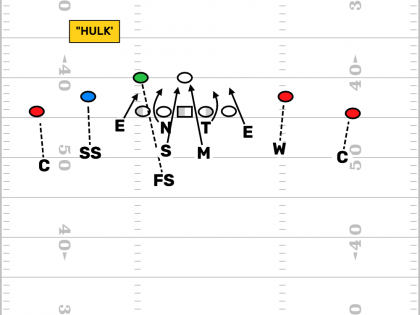 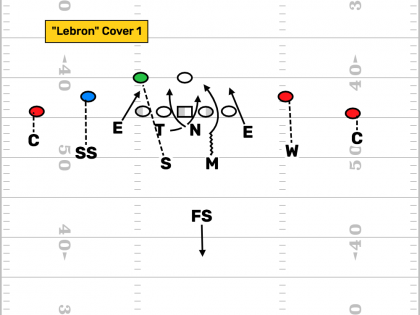 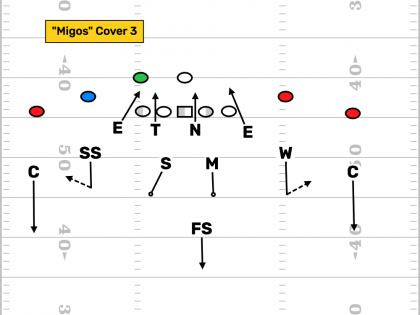 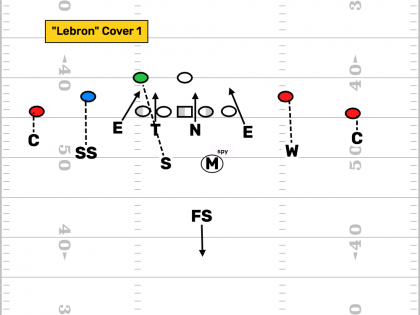 In closing,  the best defensive call in any scenario is the one in which all 11 men know what it is.  The biggest plays on offense typically occur when there’s a miscommunication assuming you have near equal talent to your opponent.  Closing down the playbook and giving an on field player that ability to choose cuts out the middle man.  As we all know,  the middle man slows down any process and causes the prices to be higher.  In your case the high price is confusion on defense and a 30 yard run off the edge where the ball carrier is untouched because you had three guys in the same gap.  Empower your players and watch them excel.