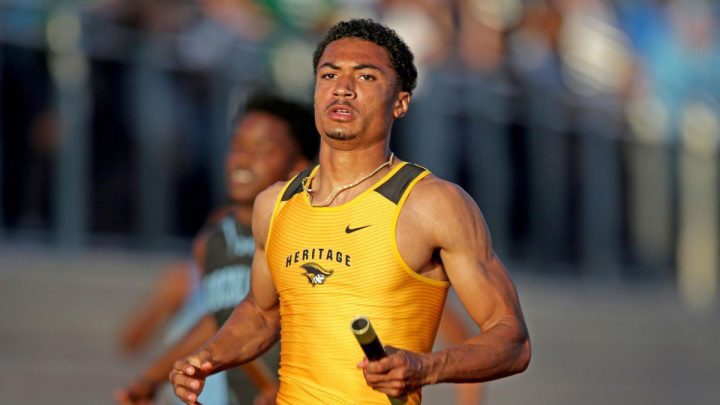 Oh you thought practicing in the Fall and playing games on Friday night was the tough part didn’t you? Try figuring out what to do with your time in the offseason.  Between the other sports,  7on7, camps, combines and school visits,  it seems that there just isn’t enough time in the day to get it all in.  With so much on the plate to be eaten it’s tough to figure out what to consume and what to push off to the side.

One of the biggest issues for skill position guys is trying go achieve some balance between playing 7on7 and running track.  At issue is the commitment that is required to be great at both sports along with the desires of the coaches for each sport. There are also a limited amount of demands that one can make on their body before it forces you to take a break when it breaks.  In an ideal situation,  both the 7on7 and track coach would have a completely open mind to you missing some time from either sport.  However,  most times,  that is not the case.  At least one,  if not both,  aren’t going to be cool with you missing events pertaining to the sport they coach.

So how do we strike a balance between these two all important sports in the offseason for skill position players.  First of all let me start off by saying this;   in my opinion,  track comes before 7on7 for defensive backs, wide receivers and running backs.  For linebackers,  I’m neutral and for quarterbacks even ones that are dual threat,  7on7 is most definitely more important.  So with that said,  if one sport has to be picked over the other then for DB, WR and RB,  it’s track over 7on7.  Some 7on7 coaches won’t like that but if they are being honest with themselves and know what they’re talking about,  they really can’t argue.  For those three positions I just named,  speed kills and track is key to building that all important component.  When Spring football,  the summer and the actual Fall season comes around you are working on your football skills (at least you are supposed to be) and you are not really working on speed development.  So,  when you shun track for 7on7,  you are overloading yourself with one element (skill) and neglecting the other (speed).  This hurts when you start getting tested and the speed times don’t measure up to your counterparts.

With all of that said,  the trick is to not have to pick one over the other but instead,  find a way to do both.  When it comes to doing this,  communication,  negotiation and understanding are key.  If you are a key member on the track team especially in relays then missing key meets is going to be a problem.  Track is an individual sport until you are a member of a relay.  When you are a good to great runner,  expect your coach to put you on a relay or two.  For the coach and that team,  it’s about accumulating points to win the state meet.  There’s also an important part of chemistry that is developed on relays when you run them in the big meets.

On the flip side,  the better player you are in 7on7,  the more willing the coaches are to work with your schedule.  They too would love to have you at every 7on7 event but will gladly take you when they can if you are elite.  This does not mean that you abuse that position that you find yourself in simply because you can.  It says a lot about a person when they have the power to do something but choose not to use it.

If you are good to great in both track and 7on7 then you need to do some communicating and negotiating.  Get the schedule for both sports as soon as you can.  Determine (with the coach) which are the big events and make a plan to be available for those events.  In the event that major events for both sports occur on the same day or weekend then choose the track meet over the 7on7 event.  Again,  this is if you are great in both.  If you are great in only one then most likely that one is your priority and you should lean in that direction.  The only thing I will say is that if you are a DB, WR or RB and you lack speed,  you should be trying to do everything you can to get some.

After figuring out which events are key.  Tell your coach up front which events you will make it to and which ones you will miss.  It may annoy either coach that you will miss but for them it’s a whole lot better to know well in advance so that they can plan than getting a text a few days before, the day of or even worse the day after.  Successful coaching is about planning,  keep that in mind.  While you are trying to be great,  be sure to give your coaches a chance to do the same.

If you are not great in one or both sports then this is where the understanding part kicks in.  When you are not a key member of a team you become more replaceable.  A coach may choose not to run you in an event or put you in the 7on7 lineup as much as you would like.  You will just have to understand that and learn as much as you can from each sport while you are not actively participating in it.  This is easier when you are a freshman or sophomore.  It’s more difficult as a junior or senior.

For the coaches that may be reading this,  treat the players that follow this formula with respect.  If they have been open and honest with you then be open and honest with them.  Resist the urge to do things to them just for spite.  Don’t make an athlete think he will participate on the event day then sit him just because you are upset about previous times he missed.  Keep in mind that he likely missed the other sport to attend yours.  Also,  keep in mind that the kid’s ultimate goal is to try and go to college.   You would never want to stand between the athlete and that goal.  Sometimes you have to put your ego in the trunk and steer the car down the road of integrity.   When all sides can communicate,  compromise and understand,   everyone has a better chance of reaching their goals.