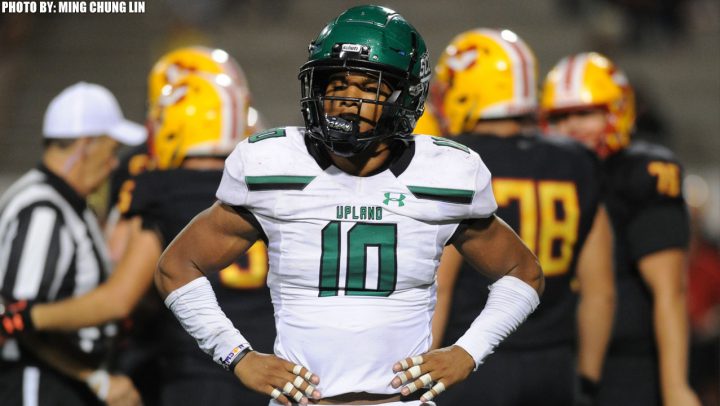 Your highlight film is your resume.  Your job is to get a scholarship.  Your resume is what gets your hired.  So don’t take that highlight video for granted.  If you play outside linebacker and want to have a chance at continuing to do so at the college level,  there are some things you are going to need to have on your resume.

We are going to go on the assumption that you have the height and athleticism requirements to play college football.  Sometimes telling people that ruffles their feathers.  It gets put into better perspective when we draw an academic example.  No one is yelling at Harvard and Yale when they don’t accept you for having an 800 SAT score.  Likewise,  there are some physical requirements that an athlete needs to meet to be considered for a football scholarship.  That,  my friends,  is what we call the facts of life.  Perhaps you lack those things and it bothers you.  Trust me,  I totally understand.  I am not saying that your goal is impossible but I am telling you that it will be very difficult.  The only way that you will have a chance is to have and present these five things on your recruiting highlight video.

This is a no brainer.  Linebackers tackle.  In fact,  linebackers are the best tacklers on the football team.  Defensive linemen are often entangled with offensive linemen and defensive back’s primary job is to cover.  A linebacker’s job is to tackle.  If you can’t do that,  then you aren’t a linebacker.  Nice form tackles,  aggressive tackles with technique are the beef in your taco when it comes to a highlight video.  Get those solid tackles on film early and often.  Football is an aggressive game and as such,  it grabs the attention of college coaches and evaluators.  I’d avoid the drag down,  had to spin him around tackles on film unless you did something highly athletic before you got there. Weak tackles from a linebacker do little to convince a college coach that you are his guy.

Blitzing is a big part of playing linebacker in many schemes.  Often times,  outside linebackers are the ones bringing the heat off of the edge.  Having the ability to show good timing along with an ability to get through gaps is a great thing.  If you play linebacker then you also know that most blitzes don’t result in you getting to the quarterback or ball carrier untouched.  Despite that,  the job still has to get done.  Show on film that you know how to blitz,  defeat a blocker and still accomplish the goal.  Truth be told,  anyone can go in and blow up a play when no one blocks them.  The superior linebackers know how to either avoid or run through a block to make the big play for the defense.

Football is a passing game now.  Offenses are sending out four and five receivers into patterns regularly.  It’s nice for a coach to not have to sub guys out because they are a liability in the pass game.  If you have coverage ability and you should,  get that on film within the first 10 plays.  If you can lock down a tight end,  running back or slot receiver,  your value goes up sharply in the eyes of college football scout.

When you are playing outside linebacker,  you will definitely have times when the play is run away from you.  Nothing is worse than a guy who shuts it down when the play is not coming his way.  Few things are more exciting than watching a guy hunt down a ball carrier from the other side of the field.  Even if you are not blessed with tremendous speed,  you can appear to be fast just by keeping your foot on the gas at all times.  Many guys slow down on the football field when the action isn’t coming their way.  If you hustle to the ball always,  you will look fast on film zooming past all of the slackers.  If you inspire the rest of your team to hustle then you can be on a great defense that attracts a lot of college scouts.

If you play defense then you know that taking on blocks is a big part of your job description.  Getting off of blocks is a highly valuable skill.  Being an un-blockable defender is the stuff that legends are made of.  If you possess this skill,  you most certainly want to display it.  There’s no scheme played on defense that allows a defender to run free every time.  However,  if you are good at beating blocks then the offense has to use two guys to do the job.  Every defensive coach wants a unit full of guys that require a double team.  You don’t have to be the president of the math club to know that this won’t work for the offense.  Show your ability to beat blocks so you instantly become a prize for a college football coach prowling for recruits.

So there you have it.  If you possess all of those skills then congratulations.  However,  don’t be an idiot.  Everyone one of those skills better be on display in the first 10 plays on your highlight video.  Don’t make the coach wait to see all of the tools in your toolbox because he may not stick around to find them.  If you are missing one or more of those skills then you had better get busy on acquiring those skills.  This goes for you athletically gifted studs too.  At some point,  just being big, tall and fast is not going to be enough.  Be a skillful player and show it on film.