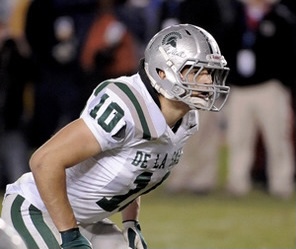 Notice how I did not say good tackler.  Of course it is nice to be a good tackler or a guy that does not miss tackles very often when you are playing linebacker.  However,  as a middle linebacker,  your tackling sets the tone for the entire defense.  It is kind of hard for a defense to have the reputation of being a ferocious one if the middle linebacker is a soft tackler.  The middle linebacker is the tone setter when it comes to good old fashion hitting.  When the “Mike backer” gets in the A gap and stones the other team’s leader rusher with a punishing hit,  not only does the crowd go crazy but so does his teammates.  This inspires them to do their individual jobs to the utmost and gets the juices going.  A middle linebacker’s job is to hit people so be a hitter that finishes off ball carriers.

While being a big hitter may give off the impression of being a meat-head,  a middle linebacker should be anything but that.  Most of the time,  the defense runs through the “Mike”.  That means you make the calls in the huddle,  survey the defense and alert the defense to what may be coming.  In addition,  any shifts by the offense prior to the snap may require you to change a call or make a check.  Finally,  within a second of the ball being snapped,  the middle linebacker has to know what is going on and move to his assignment instantly.  That’s a lot of responsibility and the guys who are the smartest,  handle it the best.  Think of how much guys like Ray Lewis and Brian Urhlacher knew about the game of football.  These things did not happen by accident.  The guy in the middle has to know it all.

If you are going to be in the middle and typically first on the scene,  you are going to have people trying to stop you.  Often times that comes in form of massive linemen that outweigh you and are coming from various angles.  Your ability to excel at the position of middle linebacker means knowing where the blocks are coming from and defeating them quickly.  The quicker you defeat the block either by being slick or with force,  the faster you can make the tackle.  Middle linebackers are measured by tackle numbers and you’re not making tackles if you are getting blocked.  Develop elite abilities in the area of defeating blockers through proper angles, pressure and technique.

Sometimes the play gets beyond you or runs away from you.  This is when you have to show your relentless nature by running down the play and getting involved.  As a middle linebacker,  this doesn’t just mean on run plays.  Even when the ball is thrown down the field and into the secondary,  middle linebackers have to turn around,  haul tail in the direction of the throw and get involved.  As a middle linebacker you have to take any attempt to move the ball into your team’s territory personally.  So,  just because a play did not come directly to you doesn’t mean that you get to take a play off.  When that ball is snapped your mission has to be to get to the football first and deal with the unsavory act of the offense trying to advance the ball towards your goal line.

I saved the best part for last.  What middle linebacker doesn’t like to blitz?  Enough with being passive and waiting for the action.  How about dictating it with a nice blitz.  However,  blitzing is an art and if you are to be great,  you better know how to execute a masterpiece.  Many young linebackers think that blitzing means running full speed through a gap and into a blocker.  That’s not it.  A successful blitz results in a sack of the quarterback or a tackle for loss on a running back.  When you slam right into a blocker,  you lessen your chance at making that happen.  Instead,  learn how to be crafty along with forceful in achieving your objective.  Part of that craftiness is learning how to time up your blitzes so that you hit your gap right when the ball is snapped.  Catching the cadence right will be the first good step in achieving your sack and tackle for loss dreams.  Also learning the various ways to dip, swim and rip through blocks will help you be a menace on the other side of the line of scrimmage as well.

There you have five things that will certainly catch a college football coach’s attention.  It helps if you are 6’3″ and 210 lbs. too but if you aren’t,  you control the five things named in this article.  Whether you have that size or not,  being excellent at the different aspects outlined in this article will go far in making your defense great and your team a winner.  When it boils down to it,  that’s the name of the game and will surely attract the attention of somebody that could use your winning ways.