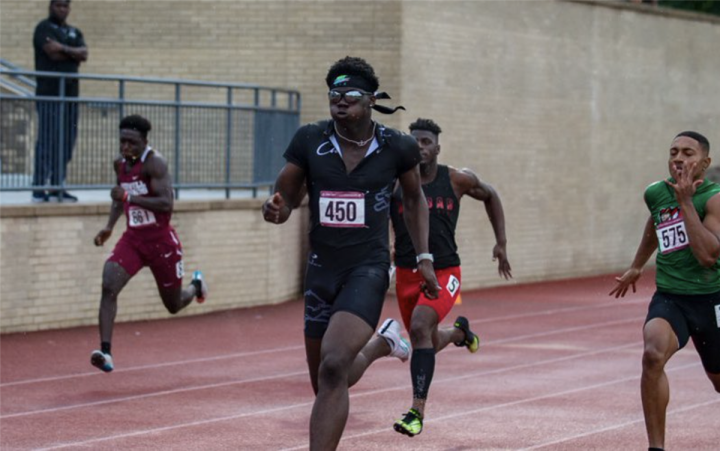 One of the most often asked question by high school football players and potential college football prospects is how the can improve their speed.  Obviously everyone knows the importance of speed for a football player but what baffles me is how so many people in this category do not know the best way to make this happen.

I suppose the advent of personal trainers has clouded the obvious for many high school football players and athletes in general.  The common theme it seems now is to either find a “speed trainer” or look up some techniques on the Internet to improve speed on their own.  Using those two ways to improve speed comes with mixed results and more often than not results in failure.

What many prospects fail to realize is that running track remains one of if not the best way to improve your speed and potentially your performance on the football field.  However,  improving your speed is not the only benefit you will gain from running track. In this article I will outline the five reasons you should run track in high school if you are a football prospect.

Sure,  I know having a personal speed trainer sounds sexy.  Don’t get me wrong there are some really solid coaches out there that could potentially work with you and make improvements to your speed.  However,  there are far more that will waste your time and your money.  The truth of the matter is that the kind of workouts that you will endure in track practice combined with the competition you will face in meets will have no choice but to improve your speed.  The whole business of track is about beating the time this week that you ran last week.  Everything is geared towards that and your speed is measured almost on a weekly basis.  You are also pitted against other competitors from other schools.  Your determination to beat them stresses your speed muscles to the utmost.  You literally have no choice but to improve your speed.

(2)  Makes You A Better Conditioned Athlete

All of that running will make your faster but you know what else it will do?  It will make you a fast athlete that can run fast more often and for longer periods of time.  The very workouts in track that are probably scaring you from going out for the team are the ones that will make you better than everyone else on the field during the Fall.  An entire offseason of challenging track workouts will not only give you the speed to hit the sidelines and outrun everyone but give you the stamina to go hard in the 4th quarter when everyone else (including some of your teammates) want to fold.  This turns you into a relentless athlete that wins more of his battles in competition.  A well conditioned body comes with a strong mind.  Strong minds win.

This is closely related to my last point.  Digging deeper,  overcome your fear of running track because the workouts are hard and you might get embarrassed in a meet puts you on your way to having the mental strength to conquer almost anything you face on the field.  The reason track athletes excel is because they are willing to do things that most other athletes are not willing to do.  How many athletes are willing to run 8 x 200 meters at 75% speed with 2 minutes rest.  Workouts like that will test you mentally.  When you complete those type of workouts and live to tell about them,  your ability to fear anything diminishes.  If nothing else,  you are able to crush football workouts in the Summer after going through track workouts in the Spring.  One last thing,  after you have overcome the struggle of trying to get your sweats off for a race because you are so nervous,  you will have less fear of playing in front of a crowd on Friday Night when you are facing an arch rival or top player.  You’ve already conquered your fears.

Track is an individual sport.  Unlike football,  you don’t get to hide in the pack and get away with giving less than your best here or there.  There are no teammates to pick up your slack,  unless you are in a relay.  When you are on that track it’s you against the other seven competitors.  Sometimes,  you are the only one dressed in your school’s colors.  In other words,  the spotlight is on you.  You will have to reconcile your performance and the place that you came in.  People will see it and will ask you about it.  If you have never run track before,  that will scare you.  If you have the guts to go out and stick with it,  it won’t be long before you realize you don’t like the feeling of losing.  You will be determined to do something about it.  That something will be workout harder,  perfect the art of running and give it your all in the meets in an effort to win.  When you return to the football field with that competitive attitude,  watch how you start dominating the man in front of you.  Most of the battles on a football field are mental anyways.  When track has made you a mentally tough athlete,  you now have the advantage over your opponent on the gridiron.

Some high school 40 times are more bogus than those I will make you rich in Bitcoin comments that you see on Instagram.  You want to be a certified speedster,  produce track times.  A coach may not believe you when you say you ran a 4.39 forty but when you can back that up with a 21.42 time in the 200m dash,  he’s going to take your word for it.  College coaches know that track times are official because track is all about the times.  Coaches and meet directors can’t run around making up times or the entire sport is up in smoke.  So when your track profile says 10.71 100 meter dash or 48.33 in the 400 meters,  college coaches know its the truth and that you have legitimate speed.  Point blank,  legitimate speed gets you offers.  You can be an average player (not that you should want to be) and get offers because you have serious track times.   Coaches always figure that they can teach a guy with speed how to be a better player.  They are less confident that they can make you faster.

You won’t find five better reasons than this to head out to your school’s track and join the team if you want to craft yourself into a college football prospect.  If a college program has one spot remaining and it comes down to you and another guy here’s what will happen.  Assuming that all other things are equal,  the spot is going to the guy that ran track or the one who has the better times in 90% of the cases.  Speed is like Bitcoin in 2020 when it comes to recruiting,   everybody wants some.